Writings on the bottle

It is required to state on the label that the content is in fact cognac.

If you can not find the word ‘cognac’,  you can be pretty sure the bottle does not contain real cognac. An exception can be made for some very old bottles, way before the Second World War. These bottles can only have the brand name stated, or are just called brandy. But most bottles that say brandy – and certainly all younger bottles – are not real cognacs.

The brand name is always on the label. It is not necessarily the same as the producer’s name. The name of the producer is sometimes not mentioned at all, for instance for some supermarket chains that like to sell cognac under their own name.

Sometimes a bottle is worthy to get its own name. They are sometimes called after names of relatives or they have beautiful poetic names.

Name of person within the distributional network

Bottles are sometimes imported by companies in such great numbers, that they have asked to have their name and address stated. They are not necessarily the vendor. It can be stated as the firm that imported the bottle or even the firm that has bottled the cognac.
If there is a B-code on the bottle followed by three numbers, that is the importer code for South African importers. (for instance: B421)

More or less the same as mentioned above for persons within the distributional network.

The name of the producer is usually mentioned, as is his address. This is not however obligated. Very often it is printed at the bottom of the label. Sometimes on the back-side of the bottle.

It is obligatory to state the content of the bottle. This may be done in milliliters, centiliters or liters. On older bottles it could be mentioned using fluid ounces, quarts or pints, either in Imperial (UK) or in US measures. More on fluid ounces, quarts, pints and gallons in a separate paragraph below.

Unit of masurement to measure the amount of alcohol someone has drunk,

developed in the nineteen-eighties. In some countries it is mandatory to put the number of standard units it contains on the bottle. This way it should be easier to know how much alcohol someone has consumed. There are two major problems: each country uses a different standard and the glasses used for a drink usually deviate from the standard glass size for the drink.

In the UK the standard drink was used between 1984 and 1987 in the UK guidelines for ‘safe limits’ for drinking. But they were replaced in the 1987 guidelines by units of alcohol, where 1 unit of alcohol equals 10 millilitres (or 8 grams) of pure alcohol. On a bottle you may find a pictogram with the total amount of units of alcohol.

It certifies that the contents of the bottle comply with certain criteria that are specified, especially that the content is not less than the nominal quatity that is stated.
It was introduced in 1976 by a EU-directive.

Very occasionally you will see the abbreviation U.P.. This stands for Imperial Proof. 30 UP is equal to 40%. A higher UP means a lower percentage. 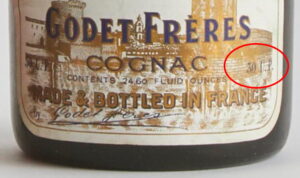 They are not required. They give information about the number of years a cognac has been stored in wooden casks before it was bottled. Some ageing designations are controlled by the BNIC, so the buyer has a warrant that the cognac is at least as old as it says it is. These are VS, VSOP, Napoléon and XO.
If there is no age indication whatsoever present, you can safely assume that the cognac is as young as a VS.
Other designations are not controlled by the BNIC. There exist well over a hundred of them. Some that are often used are: ‘de luxe’, ‘spécial’, ‘supérieur’, ‘vieille’, ‘vieille réserve’,  ‘réserve de la famille’, ‘héritage’, ‘hors d’age’. They all correspond with a minimum number of years of the official designations, but are usually substantially older. But you have to believe the producer on this, because there is no official check.

The cru indicates from which region the cognac originates. There are six different cru’s and each cru corresponds with a certain quality. They are, in order of quality: grande champagne, petite champagne, borderies, fins bois, bons bois and bois ordinaires. If ‘cru’ is stated on the bottle it means that all of the cognac originates from that cru. A ‘blend’ is the opposite of a ‘cru’. A blend cognac consists of cognacs of different cru’s.
Noteworthy is the term ‘fine champagne’. It is not really a cru, but it means the cognac is made out of grande champagne and petite champagne only, and at least 50% grande champagne. It is not to be confused with ‘fine cognac’, which has no other meaning than to say it is ‘good cognac’, for wathever that is worth.

Appellation Controlée is a certification to guarantee the cognac was produced in the specified region. So you can have ‘Appellation Cognac Controlée’, but als in combination with the cru: ‘Appellation Fins Bois Controlée’. There is one acception: the last cru (bois ordinaires) is the only cru that not has the right to bear an appellation controlée specification. ‘Fine champagne’ on the other hand, does have this right.

It has long been a custom to ship cognacs to England very soon after distillation. Here they were stored for decades in damp cellars near the shores. These cognacs are called ‘early landed’. Since some years now, this is forbidden by the French law. To have the right to call it cognac, they are required to age in the region where they originate from.

Cognac producers often participate in competitions where several cognacs are compared to each other. There are prizes to be won, usually bronze, silver and gold medals. These medals are sometimes depicted on the label or are represented by a seperate sticker on the bottle. 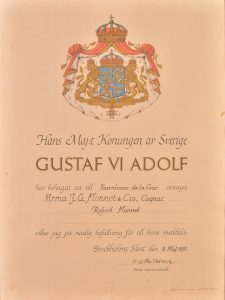 The cotisation symbol has been used between 1984 and 2000. It indicated that tax was payed to counter the health risks involved in immoderate use of the product. Also known as ‘vignette sécurité sociale’ (VSS).

The following texts and symbols are among many to be found on cognac bottles:

In Italy small round metal seals were used from around 1930 until 1959:

They were attached around the neck with a little rope.

More on this topic on the page ‘How old is my bottle’.

A paper sealing of the capsule is used to prevent fraudulous actions and tampering and to warrant the autenticity of the product.

They can also be tax stamps.

In Italy they started using them in 1959 and they are still in use. In the US they began using them in 1934 and stopped around 1985. When a date is stated on such a seal, it is not the bottling date but the date of distillation.

More on this topic on the page ‘How old is my bottle’.

Stating that the product was produced in France. Used on bottles that were sold in Germany.

Stating that the product was produced abroad. This is of course only used on bottles that were sold outside Frace, particularly in Austria.

This started after 1994. Widely used is the Mobius loop. It only indicates the object is capable of being

Reminder as to dispose of the material toughtfully, like a good citizen. Invented in de US in the 1950’s. Introduced in the UK after 1969.bla

A reminder to throw the glass container in a bin.

This symbol only means the producing company has contributed financially to recycling processes. Invented in Germany in the early 1990s.bla

Warns pregnant women not to consume the product (since 2006).

According to US federal law it is obligatory since 1989 to warn drivers and pregnant women against the consumption of alcohol:
GOVERNMENT WARNING:
(1) According to the Surgeon General, women should not drink alcoholic beverages during pregnancy because of the risk of birth defects. (2) Consumption of alcoholic beverages impairs your ability to drive a car or operate machinery, and may cause health problems.

This means so much as a ‘free sample’. Usually printed on a miniature bottle that was produced as a give away to make the public acquainted with the product.
Sometimes V.R.P. is added. This stands for Voyageur, représentant, placier. It means the bottle is produce to be given away by persons who work as sales representatives.

Federal Law Forbids Sale or Reuse of this Bottle. This sentence was mandatory from 1935 till 1964 on bottles containing alcohol and was placed on the glass in embossed letters.

Usually content is given in milliliter (ml), centiliter (cl) or Liter (L), but you come across other denominators: fluid ounce, pint, quart and gallon. Unfortunately these have different values in the US and the UK.