Today we buy our cognacs in bottles, but that has not always been the case. In the early days cognac was sold in casks. Only halfway the 19th century cognac producers started bottling their cognac. An exception was for cognacs that were meant to be sold in Africa. These had to be carried far into the interior by native porters and were carried on their heads in crates with six bottles each. So the bottling of cognac really started as late as 1850. This is remarkable because bottling of wines was already common practice at the beginning of the 19th century in nearby Bordeaux.

The bottling of cognac had a huge impact on the trade. It contributed in a big way to the popularization of the drink. Selling cognac in bottles had several advantages: it was not longer necessary to transport the cognac in heavy, awkward casks; the cognac was better preserved in glass and… you could stick a label on bottles! The labels brought about brand recognition, not only with the agents but directly with the public, so the brands could build a reputation for themselves.

Denis Mounié and Jules Robin were in 1847 the first to start, quickly followed by Martell, who was in 1849 the first to stick a label on. There are no specimens of these bottles around anymore today. 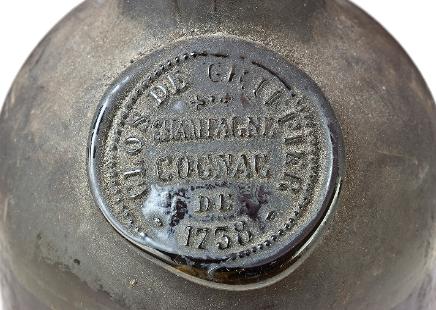 The oldest still existing cognac is a Clos de Griffier from 1738. The bottle itself of course is much younger.

The oldest still existing bottles are from around 1850. So if an old bottle of cognac from before this period is offered for sale, you can safely assume that the bottle itself is younger, though the cognac in it might well be older.
The bottles were made by hand in glass works factories, because machine made bottles only came into existence at the end of the 19th century. ‘Verrerie’ was the French name for such a factory.
Already in 1855 Hennessy was collaborating with such a verrerie, viz. Poilly Brigode in Folembray, that was established in the first decade of the 18th century (la Glacerie de Folembray). Many traders from that time purchased their bottles in Bordeaux.
As brand recognition is becoming more and more important, trademark registration commences. In 1856 a law is adopted that allows registration of trademarks. Hennessy is the first to deposit name and logo, but not until 1864. His logo is the arm, armed with an axe. Hine is second, he uses a deer lying down.

It is not very difficult to think of stating an age-indication on the labels. Again it is Hennessy who is the first to do so in 1865 and he introced a system for it: the use of stars. One star for cognacs that has aged two years, two stars for cognac of four years of age and three stars for a six year old cognac. In 1870 Hennessy also introduced the XO-indication for his eXtra Old cognac.

With the bottling of cognac a whole new industry comes into being: manufactoring crates, labels, corks and of course the bottles themselves.
The work of a glass blower was not particularly healthy. The workers ususally died before they were fourty years of age. It is not possible tu underestimate the hardships of this trade. It was the industry with the highest mortality rate of all. 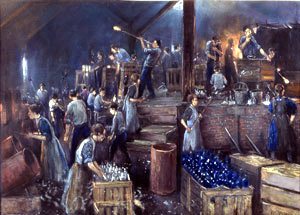 Graveyards were created next to it and they were always busy. In this period of time boys started working when they were ten years old. First just as labourers carrying things around, but very soon as glass-blowers. The ovens were heated well above 1000 Celsius (1832 F) giving a surrounding temperature between 45 and 50 Celsius (113-122 F). Colds, bronchitis, and pneumonia were frequent, as was consumption. The raw material for making glass, sand with its quartz or silicon, was floating freely through space and were inhaled in huge quantities causing pneumoconiosis or silicosis, an addictio that caused severe shortness of breath. One had to blow for a long time into a long hollow pipe with the glass mass attached at the very end and giving a lot of pressure at the same time. This prolonged blowing caused glass blowers cheek: pain in the cheeks, extending to the ears, evetually preventing the workers to continu working. And I won’t start mentioning the ubiquitous and severe burns. 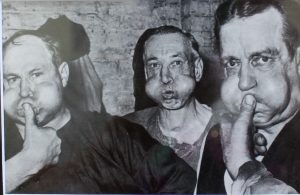 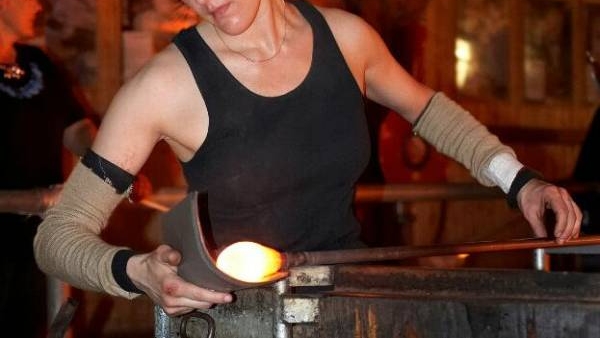 To the left glass blowers cheeks. On the right: good protection against burns is obligatory.

It is not fully clair which one glass factory was the first in the city of Cognac. In ‘Le livre du Cognac’ Bruno Sepulchre mentions a certain Matignon who buys a plot of land in the Cagouillet district and starts a glass works; other sources say Oscar Planat (owner of the cognac brand Planat) was the owner of the ‘verrerie de Cagouillet’. This factory is sometimes also called ‘verrerie de Sèchebec’. This plant must have been located near the ‘Dolmen de Sèchebec’, a pre-historic megalithic tumulus now located on Rue de l’Echassier, between the side-ways Rue de Sèchebec and Rue du Dolmen. In this context Matignon is a conspicuous name: Dolmen de Sèchebec dates back to the Matignon civilization (source: Bulletin de la Société préhistorique Française; 1966; article written by N. Bayne, Cl. Burnez, T. Gee and R. Riquet: Le Dolmen de Sèchebec à Cognac; Vol. 63, nr. 3). Is it possible Bruno Sepulchre has made a wrong interpretation? 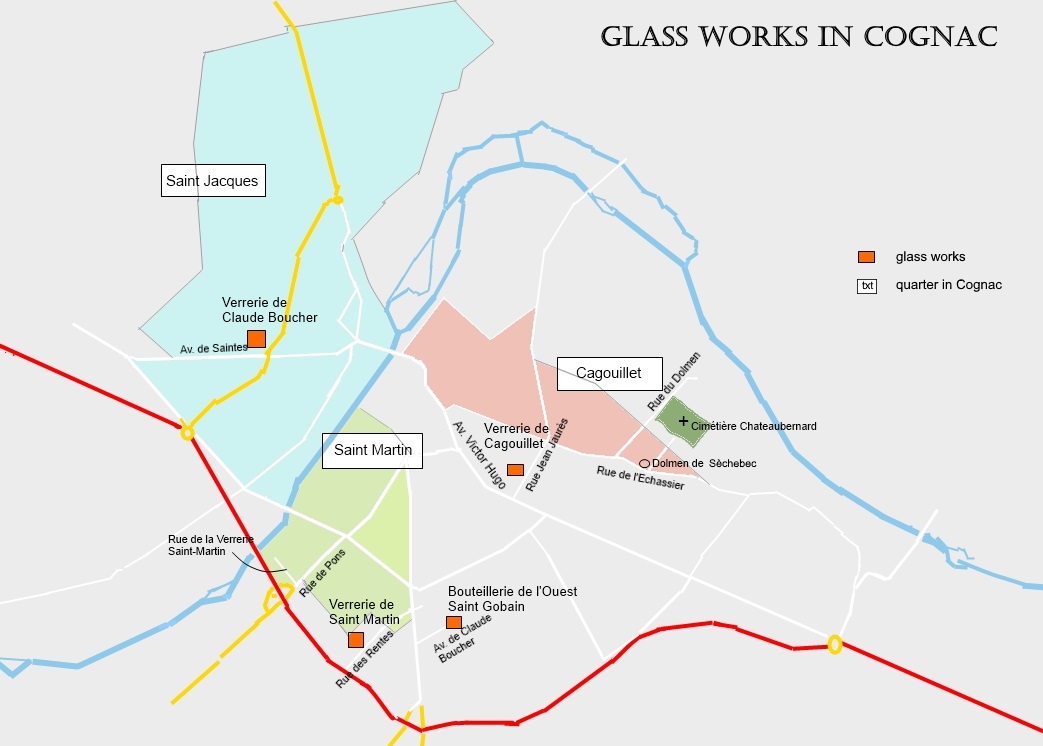 This factory once stood on Rue Jean Jaurès, where number 30 is now, but nothing has remained. The plant was probably buid in 1854.
In 1865 a certain Vaysette started a glass works in the quarter of St. Martin: ‘verrerie de St. Martin’. This was build on the Rue de Pons. In 1878 this factory was bought by Claude Boucher. Claude Boucher was born in Blanzy in 1842 and had been working at the factory where his father worked as a chaffeur. He was only ten years old when he started and worked there until 1865. Next he has worked in the glass works La Tremblade (by the sea near Marennes) and after in the glass works of Faymoreau in the Vendée. Here he became a foreman. In these three factories he has learned the trade, during which he was particularly interested in the chemical aspects of the glass blowing process.

Boucher had to deal with severe rebelling of his personel in 1893 and he decided to close his factory. In the three following years he made his inventions, that made it possible to build a semi-automatic machine for making bottles. In 1897 he re-opened his factory, this time with his contraptions. 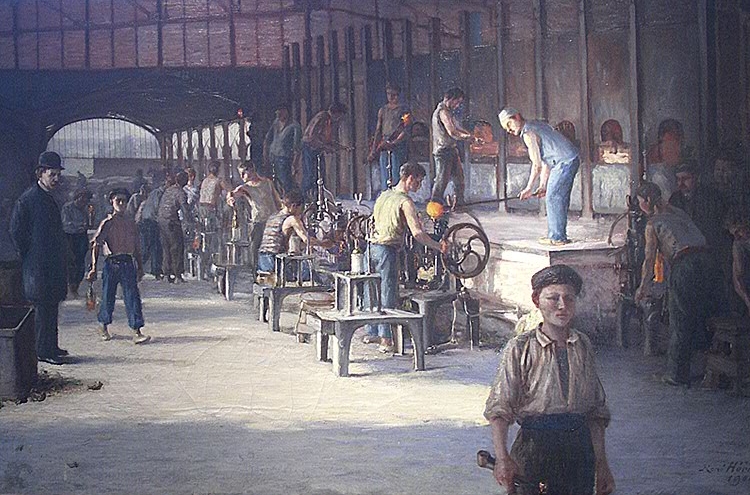 In 1894 and in 1889 he registrated two important patents. Boucher’s machines were applied in many other factories troughout Europe and they have made him a very rich man. He was decorated in 1909 for his contributions to the industry and to the public health by his government with a knighthood (Chevalier de la Légion d’Honneur).
Claude Boucher moved his factory some years later to the district Saint Jacques on the other side of the river Charente.

Like for Bordeaux wines you have the bordelaise bottle and for Bourgogne the bourguignonne, cognac also has a bottleform that is typical for cognac: the cognaçaise. A cognaçaise bottle of 70cl, most common content for a normal bottle, has a height of 30 cm and has a diameter of 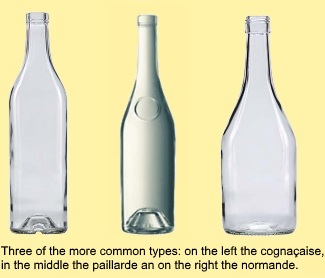 7.3 cm at the bottom, gradually widening to the top but only a little. At the shoulder the diameter is 7.4, just one millimeter wider.
Some cognac producers deviate. Well known of course is the ‘paillarde’ from Martell: 30 cm high, diameter below is 7.9 cm and at the shoulder 8.3 cm
The standard Hennessy bottle is again more sturdy: the normande.
A lot of cognac producers have their own model and during the last twenty to thirty years more and more different forms have emerged. Though still a lot of producers stick to the traditional cognaçaise, many have choosen their own form to use next to the standard one. For their standard cognacs they keep the cognaçaise and for special bottles or limited edtions they use the other one.
For the top quality cognacs of their brands the producers tend to use increasingly more expensive bottles. Today the majority of XO’s is put in crystal decanters, sometimes beautifully adorned with engraved curls. And the older the quality of cognac that is inside the bottle, the more lavish the packaging gets. There seems to be no upper limit to it. For instance, Voyer’s Extra comes in a wooden framework, which has a locking device on the back with a magnet. This is still very modest. The Henri IV Héritage of Dudognon is set with gems and covered with a thin layer of gold. It costs a staggering two million dollar. Another fine example is Hennessy’s Beauté de Siècle: it sits in a box made of aluminum and glass. When it is opened with a bronze key a tray slowly comes up with two glasses and the bottle on it. You can buy this little toy for 200.000 dollars. 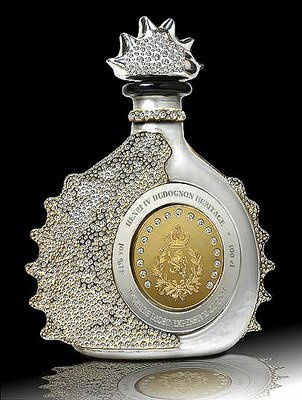