There are a lot of different categories of cognac producers, but the first and most important difference you can make is that between bouilleurs de cru (farmers who distill and sell their own cognac) and négociants (merchants). The merchants are the best well known, especially the bigger ones: everybody has heard of Hennessy, Rémy Martin, Martell and Courvoisier. Almost all of the merchants buy wine, eau-de-vie and/or cognac. Although a few of them actually own vineyards too, this is the main difference between merchants

So the merchants purchase their base material: wine which they distil, eau-de-vie (that is brandy which is too young to be called cognac) or cognac. This is stored for further ageing and when the cognac has matured enough, the maître de chai or master blender will assemble a blend. He will choose from different years and different crus (regions) and put them together, achieving an overall harmony and consistency required by the market. This is the skill possessed by the bigger ‘maisons de cognac’: to purchase base material of good quality, let it age in just the appropriate environment (dry or humid) for this particular eau-de-vie, in younger or in older casks according to the style of the house and subsequently compose a blend out of the hundreds of different cognacs (different ages, different crus and form different produces) from which they can choose. The skill that the bouilleurs de cru possess is quite a different story. They will have to be accomplished winegrowers, distillers, cellar masters and on top of that they need to have a bit of a commercial disposition. It all starts with the selection of the combination of grape and rootstock. Then they will have to manage the vineyard, fertilizing it and protecting against diseases, choose exactly the right time to start harvesting, the pressing and fermentation of the grapes, two very delicate processes and subsequently conduct the very complex process of the distillation. Afterwards they too mature their cognacs, but they have less choice in which chai they store their product. the environment. And because they only use their own cognacs to assemble a blend, they have less regions to choose from, most often just one. They can however use different years for their blends. Very few bouilleurs de cru also buy some eau-de-vie from colleagues to use in their blends. Strictly spoken you may even ask yourself if you could still call them bouilleurs de cru! 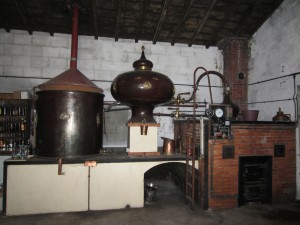 Almost all bouilleurs de cru are family businesses, who have passed from father to son for many generations. Some of them have build a name for themselves and sell their cognacs through a limited number of retailers, others are virtually unknown to the general public. You will have to go and visit them to be able to buy their cognacs. It still happens now and again that a young entrepreneurial farmer starts his own company. This must not be taken too lightly. To be able to buy the necessary equipment, including a pot still, you will have to have a million euro or thereabout.

It also happens that established winegrowers who have worked for dozens of years, making eaux-de-vie and selling them to big firms, take their chance and start maturing and selling their own cognacs. Often they are already in possession of the equipment needed, but again, one can not take this step to lightly. It is one thing to produce your own cognac, but to sell it is quite a different story: what bottle to use? What to put on the label? How many bottles are we going to produce? Where will we find our customers? Can we compete against the big names? Al lot of uncertainties await for these adventurers. The big firm will often break the contract they have had for years, so they loose their financial basis. They still can try to sell their eau-de-vie to one of the other firms, but more often than not, they will have to find new buyers each year again.

One of the attractions of a trip to the Charente region is to visit some of the smaller bouilleurs de cru. It is no problem if you just drop by, but then there is always a slim chance that nobody will be at home. The unannounced visit has it own charms. Sometimes the owner is working his land and you get to meet the wife, or maybe the grandmother. They also can provide very interesting stories which are never boring.

Some of the bouilleurs de cru have developed a sense of business and have created a little store or have established a little tasting room. Others welcome you in a separate little room, furnished like a normal living room, were they receive their guests.

It is not always obvious were to find en entrance. The farm is often built in a square, surrounding a spacious courtyard. A big Roman gate give access to this courtyard and it can make you feel like you are intruding if you go through this gate. This style of architecture led you to believe that the people who live here, are shy, unsociable even. With a history as violent as theirs that would even be understandable, thinking back to the French-English wars and the Religious wars in the 17th century where there was massive murdering and plundering. But not so! These people are as hospitable as they come. They will let you taste all of their products, knowing that you maybe just buy only one bottle. If your interest is showing enough, maybe you’ll get the grand tour: the warehouses, the presses and of course the alembic or pot still. Their proud is enormous and they think it great that foreigners come from all over the world to Charente and to their little store. I once met a farmer who had a big map of the world, that hang on the wall. And every visitor had to pinpoint his city or place were he was from on the map with a little flag. They truly come form all over the world!