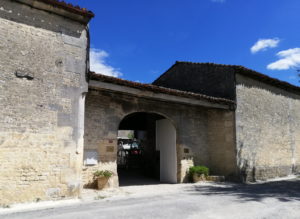 In 1771, François Gaborit gave his properties around Mérignac to Pierre Nalbert (son-in-law). He founded his company in 1811. From 1833 his son Denis took over. At the time, they still owned a 396 liter wood-fired pot.
In the 20th century the estate continued to grow under Pierre Mousset. In 1973 he installed his first 25 hectolitre alambic. The second was installed by his son-in-law Bernard Vaudon, who was married to Anne Marie Mousset and who combined the efforts of two winegrowing families.
When Anne Marie Vaudon, born Anne-Marie Tardif, married into the family, she brought grande champagne vineyards with her. Now the company was a multi-cru cognac firm.

In 2018 Pierre Vaudon took over Voyer, for whom he had been a maître de chai for may years.