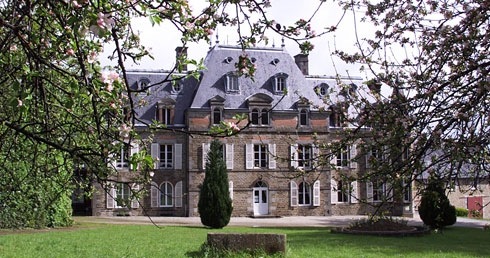 In 1937 René Gilbert starts making Calvados and calls his company Calvados Gilbert. In 1941 he moves his company to thee Manoir du Coquerel in Milly, near Saint Hilaire du Harcouët. Also around that time, the company has changed its name to Domaine du Coquerel.

In 1971, Domaine du Coquerel is bought by Asbach, who moved it to its subsidiary, Domaine du Chillot in Saint Preuil. In this period Asbach started with product diversification and the production of cognac under the name Guy de Bersac will also have started then. In 1991 Domaine du Coquerel becomes the property of the Guinness brewery and in 1996 François Martin buys the Domaine du Coquerel and moves it back to Milly. First and foremost they make Calvados, but they also produce a few other drinks, including the cognac Guy de Bersac.

It is unclear where the name Guy de Bersac comes from. The brand may have existed for some time. It seems that Brillat-Savarin, known for its Norman cheeses, already produced cognac Guy de Bersac or had it produced. Sometimes you come across fairly old bottles that say ‘tradition Brillat-Savarin’.

It is also unclear where the cognac is currently made and by whom. It is possible that it is still made at Domaine du Chillot (Asbach) in Saint Preuil. Incidentally, Asbach was bought by Bols in 1999, which sold the warehouses (chais) and cognac to Dinevico, but retained the employees.

Range (blends): Fine Cognac, VSOP.
In the past, other qualities have also been made, such as the XO Grande Champagne and some millésimées.

Other brands (formerly) produced by Domaine du Chillot are:

https://www.levoncognac.com/levoncognac.html
Address: 42 Rue Armand Simard in Cognac (not for visiting).