Who was Paul Ronne?

Paul was almost certainly the most important collector of Cognac ephemera to mark the importance of the cultural history of this world famous spirit – Cognac.

When he retired in 1989, (although he had been seeking out treasures for some time beforehand), Paul began the serious part of his collection of cognac labels. He found them both fascinating and beautiful and realising that their significance to the cultural heritage of cognac needed to be conserved, he set about tracing as many as possible which by the time of his death in 2016 numbered over 25,000.

This was achieved with the cooperation of several friends and the owners of a number of cognac houses who allowed him to visit their dusty attics to search through their archives, many of which hadn’t been accessed for years.

Whilst looking for labels this led to Paul also discovering a range of other items, posters, ashtrays, glasses, crystal and glass decanters, miniature cognac bottles, letterheads, card games, penknives, drip mats, and thousands of other advertising related items from the late 19th century to around the mid-20th. And not just advertising materials, he also discovered and subsequently saved thousands of other archives on a variety of cognac producers, books, maps, the gabarre and other such items long since lost.

When the Musée des Arts du Cognac was nearing completion, in 2002 Paul incredibly generously decided to give his entire collection to the Musée so that this precious documentation would be preserved in perpetuity.

For this gesture, Paul was made a Citizen of Honour of the town of Cognac in 2003. The MACO opened in 2004 where significant elements of Paul’s collection can still be seen today…as they will forever. In fact he donated so much, it is impossible that everything could ever be displayed at any one time, so the majority remains in the Musée’s ‘reserves’.

Background and where we are now

On 28th December 2006 just after MACO had opened, Paul was encouraged (aged 82!) to acquire a computer so he could create a permanent record – for free access by anyone interested – of the all the 25,000 labels he had amassed in binders in his small house in Gensac-la-Pallue. He had been inspired by a friend, a collector of wine labels known as Pierre Vin, to create a similar online reference for all of his Cognac labels.

Thus began an incredible journey where almost every day to the point of exhaustion, Paul would take the pages from his binders, remove each label one-by-one, scan them and upload them to his new website La Collection de Paul.

This took at around 8 years.

Paul completed this work about 2 years before he died in May 2016, but he was always tinkering with the site, changing, adding, removing, improving…it was his life and joy.

After Paul died a few of his friends provided the support to keep the site available online until they were no longer able, and the site became dormant in late 2018.

Paul’s dream was always to ’provide free access to all‘ so a few friends have obtained the contents of the La Collection de Paul website and have managed to find a way to resurrect it, with thanks to Ton Hendriks at cognac-ton.nl.

What this link leads to (click the photo top left) is a ‘static’ version of the La Collection de Paul website. For those previously familiar with the site, for the time being it is missing a number of features. For example, the English version is not always working properly, live links to a number of sub-pages don’t work, the ‘livre d’or won’t work. But the good news is that the links to the labels for cognac and pineau are still there (as well as a few others such as fruit liqueurs, rums, etc)

The future of the La Collection de Paul website

It is the hope to reformulate the La Collection de Paul website and re-launch it sometime in the future to make it interactive as it once was. To reinstall all of the links, to restore a fully functioning English version, but this is a challenge technically, time-wise  and financially, but the challenge will be taken up.

So watch this space. And if anyone has either or both the technical or financial resources to help achieve this, please contact Ton Hendriks in the reply box below. 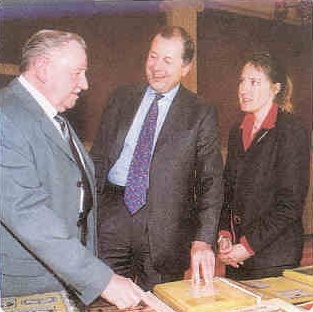 Collectioneur Paul Ronne being made honorary citizen of the city of cognac in 2003 in company of Jérôme Mouhot and Laurence Chesneau-Dupin, the Mayor of Cognac and Directrice des Musées de Cognac respectively.
↑