In 2008 Camus started with the production of the Masterpiece Collection. From 2008 to 2014 they made six bottles, all with the same shape and all with a name that begins with ‘Cuvée’ followed by a number. The number consists of two parts that both have a special meaning.

All the bottles are made of Baccarat crystal and were designed by Serge Mansau, an inspired French painter.

The Cuvée 3.128 of 2008 is a blend of three different eaux-de-vie from the fins bois district.

The Cuvée 4.176 is made of four different petite champagne cognacs and their ages add up to 176.

In 2011 Jean-Paul Camus was 65 years of age and his son Cyril was 40 years, together they were 105. The name  Cuvée 2.105 refers to that number. It consists of two grande champagne cognacs of which the youmgest is aged for 40 year. The age of the older cognac is not given, but it would be no surprise if it was 65 years old.  One eau-de-vie is said to be made out of colombard grapes, the other one out of follle blanche grapes. 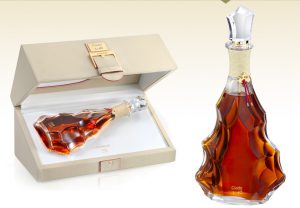 The Cuvée 3.140 of 2012 is made from three different cru’s – grande champagne of 65 years of age, petite champagne 39 years old and a 36 years old bons bois – from three different ‘chais’. The total age being 140 year. This bottle comes in a beautiful and expensive wooden box covered with cream coloured hand stitched Italian leather.  Around the neck it has a leather lace adorned by a 24 carat gold clover leaf. 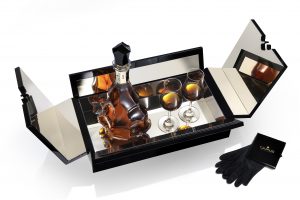 The last bottle of the Masterpiece collection, the Cuvée 5.150, was made in 2013 to celebrate the 150 year anniversary of Cognac Camus. The five stands for the five generations of Camus and for each generation a different cru has been chosen to represent it. The bons bois has been aged for 37 years and represents Jean-Baptiste Camus who invented the slogan ‘La Grande Marque’. His son Gaston Camus secured the firm a contract as the official supplier to Czar Nicholas II. He is been paid tribute by a 22 year old fins bois. Michael Camus is honoured with a 37 year old petite champagne and Jean-Paul Camus with a 32 yeard old borderies. For himself Cyril Camus has chosen a 32 year old grande champagne. All these ages together add up to the number 150.
This last Cuvée is much more expensive then all the masterpieces before. It comes in a streamlined black laquered case with brushed metal plaque on top. In the center of this metal plaque the emblematic clover leaf of the Camus brand has been carved to allow a little of the ambour coloured cognac to be seen. The box also contains two tasting glasses. The Baccarat decanter has a black crystal stopper. Only 1492 numbered bottles were made and the first 150 bottles come with a 100 ml ‘ultimate sample’ bottle which contains the last sample taken by the cellar master just before the decanters were filled.

For the collector wo wants to possess all five pieces of the Masterpiece Collection Camus has designed the Organoleptic Piano. It is a stand in the shape of the letter ‘C’, which of course stands for Camus. It has been designed by the Camus in-house design team and manufactured by the renowned cabinet maket Ateliers Drevelle. The compartiments are opened by the touch of a a fingertip, like a real piano is operated. The black-laquered pedestal rests on a leg made of white laquered steel. But… only one is made and it has already been sold to an unknown buyer for a unknown price. 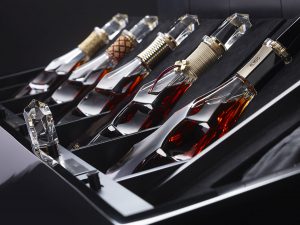 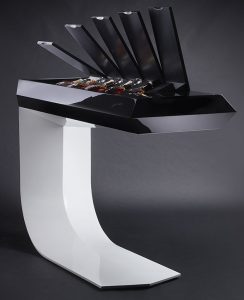 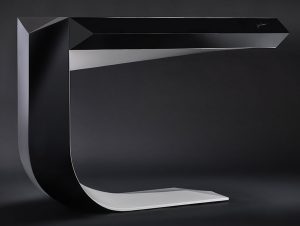 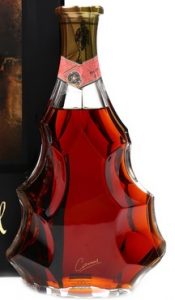 This bottle too has a strong ressemblance with the bottles of the Masterpiece collection, but this one is called Rarissimés, Cuvée 4.160 and was released in 2019. It should cost about €6.000,- but I have seen it for a lot less already. Made of 4 different eaux-de-vie.
By the way, nowadays Camus is calling its Masterpiece collection bottles also Rarissimés.