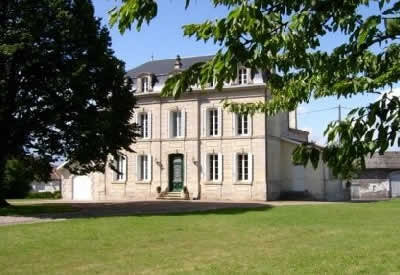 The family has been winegrowers for five generations. Today, it is Christian and Christophe, father and son, who run the 110-hectare cognac estate. They do not specify whether it is fins bois or bons bois, but the vineyard is just about on the border of both areas. Since the fins bois around Mirambeau is known to be of good quality, you would expect them to mention it on the label if it was fins bois. So that argues against it being fins bois. On the other hand, they have a very large vineyard and eight alambics, which in my opinion argues against a bons bois quality.
The address is St. Martial de Mirambeau, a commune belonging to fins bois, but that could still be the residence and not the vineyard.
They also have a bed and breakfast facility (with pool) and advertise that more than their cognacs.

Range: US, XO (possibly other qualities such as VSOP).

Update January 2022: 6th generation in charge, Sandrine Tardy. In total there are 13 alambics on the premises. The company is called Distillerie de La Bertonnière