The Different soils of Charente

The natural regions of Charente and Charente-Maritime 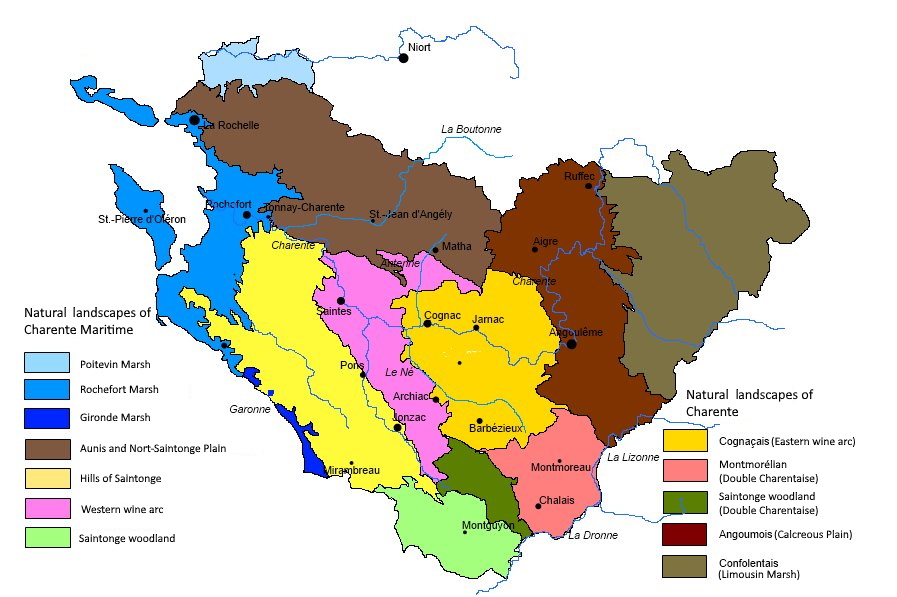 (Most of the Poitevin Marsh and Le Confolentais do not belong to the Cognac appellation). 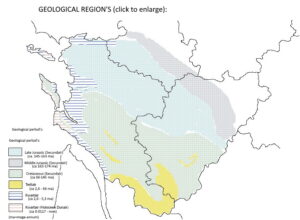 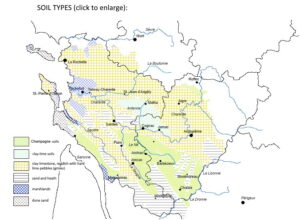 The champagne soils are the best for cognac. They have clay-limestone on the surface, on a layer of soft chalk from the Cretaceous period. When you take the chalk in your hands, it crumbles easily. You find these soils mainly in the Eastern Wine Arc and the Cognaçais, but also along the Gironde. It is not for nothing that the winegrowers from this area have been trying for a long time to raise their appellation from fins bois to grande champagne, or at least to petite champagne.

The champagne soils were formed in the Cretaceous period. Within the late Cretaceous period, several periods (stages) are distinguished whose names are derived from areas in the Charente, namely the Coniacian, the Santonian and the Campanian. These areas were first defined by the geologist Henry Coquand, who has been very important for the division into cru’s as we still know them today. The Cretaceous soils of the Campanian form the heart of grande champagne. The chalky soils of the Santonian cover a large part of the petite champagne. They contain less chalk and are more solid than those of the Camponian. The city of Cognac was built on an important part of the Coniacian.

As can be seen on the maps, the champagne soils do not entirely correspond to the grande champagne and petite champagne areas.

The borderies are relatively chalky, often clayey mixed with sand and flint.

In the Pays Bas, the area north of Cognac and Jarnac with Matha as its centre (corresponds roughly to the green-red part on the map of soil types) consists mainly of marl-limestone. The lower layer is siliceous. This type of soil is sometimes also called groie.

(Groie: different types of soil are called groies, mostly it is calcareous clay soil, but it is characteristic that it is dotted with pebbles of 0.5 to 3 cm in size).

The Aunis plain and northern Saintonge have a lot of groie soil, as does a large part of the Angoumois. The southern groie area, which is mainly found on the Saintonge ridge, has a different composition as it dates back to the Cretaceous period, unlike the more northern groie areas which date back to the Jura. Groie consists of clay-limestone soils with a high proportion of boulders. In the northern Jura Mountains, these boulders are much harder. This soil is often red-brown in colour. On the Saintonge ridge, the soils are sometimes called doucin(s), which also indicates that they are softer.