After the vinification distillation comes next. The sooner distillation starts, the better, but often the wine has to wait for a couple of months due to a limited capacity of the stills.
In Charente the process of distillation is subjected to many regulations according to Law, the most important being the Law of may 15th 1936 (see also Development of legislation). If the eau-de-vie has not been produced according to these regulations, it is not allowed to be called Cognac. 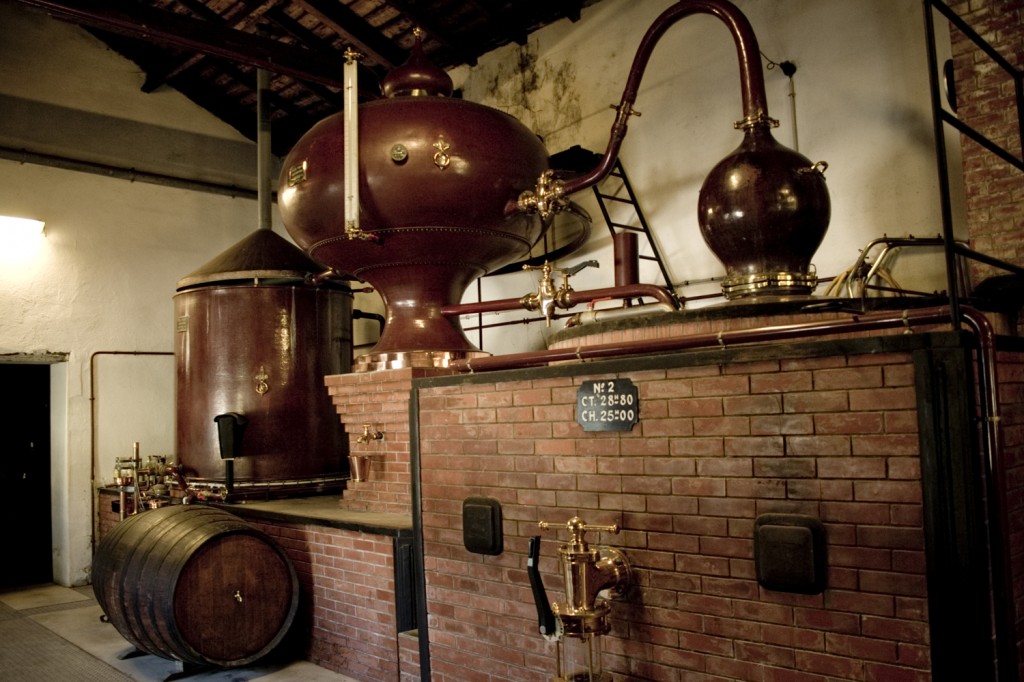 One of the regulations prescribe that the eau-de-vie has to be distilled twice. The first distillation (la premier chauffe) turns the wine into a brouillis, a product of roughly 30% alcohol. In the second distillation (la bonne chauffe) this brouillis is converted into eau-de-vie of just about 70%. The product is a clear, transparent liquid with a flavour of vine blossom and grapes.

The pot still or alambic.

Distillation has to be done in a copper made still that is called alambic charentais. The components are a copper still, le chaudière, heated by a naked flame. The chaudière sits in a bricked oven that used to be heated by wood or coals, but is nowadays heated by gas. The rising fumes  are guided into the head, le chapiteau, and then down through the swan’s neck, le col de cygne, that leads to the cooling coil, le serpentin. The cooling coin houses inside the refrigerant or condensor, le bassiot, and is very very long. The refrigerant is being cooled by water to let the fumes cool off and condensate. At the end the liquid is being collected in a cask.

More and more producers use a preheater, chauffe-vin, a big round container holding the wine that is to be distilled next. The swan’s neck runs through this container, releasing warmth to the wine in the preheater. The idea being of course to cut back the costs of heating. 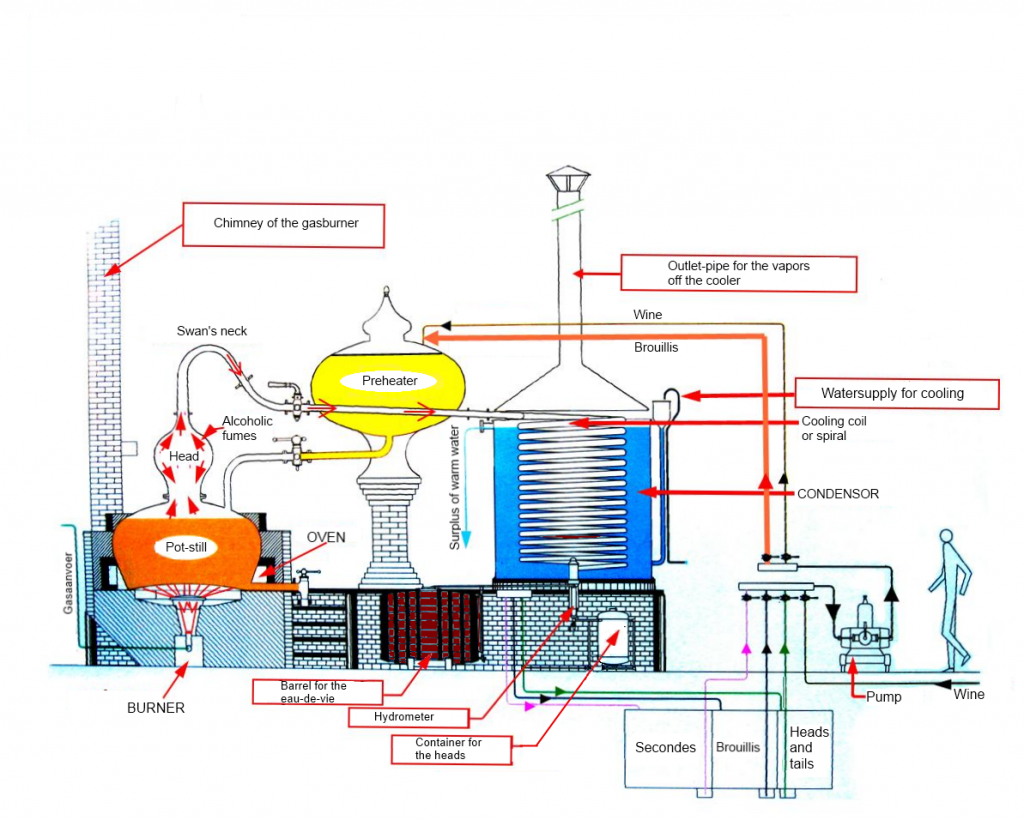 Not all of the distillation product will be used. The first part, the heads (les têtes), contains very volatile components that are way too strong. They are set apart. The middle part is were it is all about. This is called the heart, le coeur. The last part, the tails or queues, has too low an alcohol percentage and is also set apart. This is true as much for the premier chauffe that produces the brouillis, as it is for the bonne chauffe that gives the eau-de-vie.

So at the first distillation heads (têtes), heart (coeur) and tails (queues) are being distinguished from each other. At the second distillation there is also secondes (after the heart, before the tails) that is set apart. The tails of the second distillation are sometimes called flegmes. The heads, tails and secondes may be added to subsequent distillations. It is the cellar master who makes his choice in these matters, based on his experience and his olfactory organ! The schema below shows which possibilities are feasible. 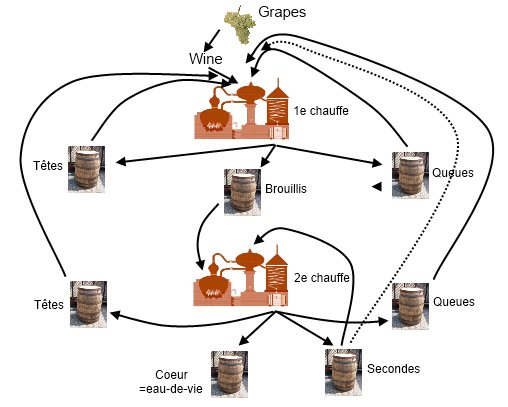 An other choice to be made is in the use of the lees, the deposit of yeast cells and the pips and skins of the grapes that have sunk to the bottom. To distil on the lees is more difficult, but it results in a rounder, richer and very characteristic flavour. Stirring now and then is necessary to prevent the lees that sink to the bottom from being burnt.

The vapours disappear through the head of the still en through the swan’s neck into the serpentin. On their journey they release part of their warmth to the wine in the preheater. One has to be careful not to overheat the wine. When the wine reaches temperatures above 40-50ºC oxidation will start which will have a bad influence on the taste.

The vapors cool down and condensate in the swan’s neck and the spiral inside the cooler. Eventually they are collected in the receptacle. First the heads which is set apart, then the heart en lastly the tails. In the second distillation the secondes are also separated from the tails. The separation of the different portions is called cutting and especially the cut after the heart (le coupe) requires a lot of skill. Traditionally it is the maître de chai who determines the right moment by smelling, but nowadays automated readings of the alcohol content are being used.

Volumes and percentages of alcohol.

Table with revenues of the bonne chauffe

The load of the stills changes depending if distillation is on the lees or not and depending on the amount of phlegmes or secondes that is added to it.