The climate inside the cognac region differs. In the Western region the climate is highly influenced by the proximity of the ocean and its westerly winds, especially from the northwest. On the eastern side lie the mountain slopes of the Massif Central. It is because of these influences that the quality of cognac is not mainly determined by the characteristics of the soil. If this would be the case, the quality of the cognacs would follow the lines from northeast to southwest consistent with the types of soil as they appear at the surface. 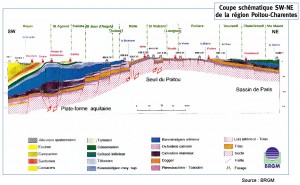 But as we know, the cru-lines lie in concentric circles. Because of the above mentioned sea winds, the chalky earths in the neighbourhood of the ocean produce cognacs of far lesser quality. At the same time, the cognacs in the East part of Charente where the Santonien and the Campanien continue in the Périgord, are not particularly good because the temperature is considerably lower on the mountain slopes.