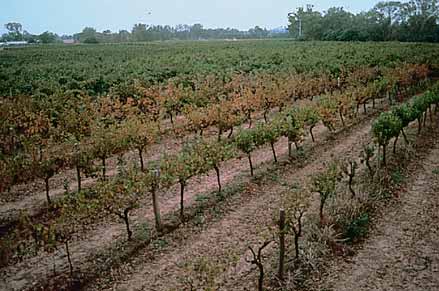 Phylloxera infested vineyard: very little foliage and brown colouring of the leaves through damage to the roots.

In the 19th century the European vineyards were harrassed by a huge plague brought from America: the wine louse or Daktulosphaira vitifoliae of the Phylloxeridae family. In France this louse was originally called Phylloxera Vastatis and today is still known under this name, especially in the cognac region. The plague reached France in 1865, just ten years after another big crisis had been averted, namely that of the oidium or powdery mildew (not to be confused with mildiou, the downy mildew). The people that were responsible for the new disease were some enthusiastic English botanists who had brought wine plants from America to England in the eighteenfifties. The native American wine plants were resistant to this louse, at least in part, but in England several 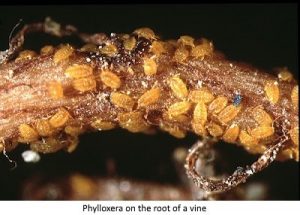 vineyards got infected. They were already destroyed before the first signs on the mainland became visible. Here it began in 1863, where in the Provence around the Rhône the first vineyards inexplicably languished. Between 1865 and 1868 Provence vineyards were destroyed in large numbers and a committee of scientists from the Société Centrale d’Agriculture de l’Hérault was set up: Jules-Emile Planchon, Gaston Bazille and Félix Sahut. On 15 July 1868 they dug up some roots in Saint-Martin-de-Crau between Arles and Marseilles and using a magnifying glass, they discovered masses of very small wriggling yellow creatures. The entomologist Signoret recognized that the louse belonged to the family of Phylloxeridae. And Planchon, with a good sense of drama, called the louse Phylloxera Vastatrix, which means the destroyer. And so it is still called today: Phylloxera, wine louse, grape aphid or just ‘Insecte’, with a capital!

In the cognac region the first vineyards were not affected until 1872. This was at Grouin and at Chérac. But three years later the whole region was involved, except for the Borderies and the ‘Pays Bas’, where the little animal did not do well due to the relatively humid soil. 1878 and 1879 were the years with the greatest havoc. Eventually more than 80% of the vineyards were destroyed. Fortunately, large stocks of cognac were built up in the approximately ten previous years. Notably 1869, 1871, 1874 and 1875 were particularly good years with very high yields. Because the big houses could now sell their cognacs at much higher prices, due to the shortage that had arisen, they became even bigger. But many small wine farmers went bankrupt. In 1877 there were still 283,000 hectares of vineyard in the cognac region, in 1893 only 41,000 remained!

As is mentioned before, the phylloxera belongs to the family of Phylloxeridae, which in turn belongs to the order of the half-winged or beak insects (Hemptera); one of the many species of 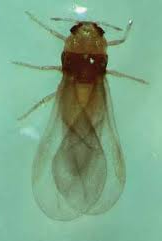 aphids. It is a creature with a complex life cycle, because it has as many as eighteen! different forms or stages. The four main ones are the sexual form, leaf form, root form and the winged form. The fully developed insects, the adults, are all female and are capable of asexual reproduction (parthenogenesis). They lay about 200 eggs at a time and can do so up to seven times every summer. So one animal can completely infect an entire vineyard.
There is still much unknown concerning the life cycle of this creature. For example, we do not know how many crawlers or larvae hibernate or how it comes to pass that all of a sudden a winged form develops. The winged form hatches in autumn, laying male and 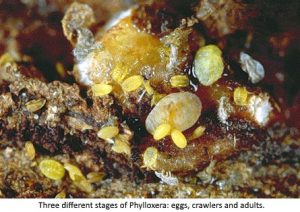 female eggs before it then dies. The male and female larvae mate and each female larva lays one egg in the bark of the vine. Then these die too. The one egg hibernates and in the autumn female larvae (nymphs) emerge who asexually multiply by laying eggs in galls that they form on leaves and vines. These are hundreds of eggs at a time and she can do this several times (up to about seven) in one summer. These insects either make new galls on the leaves or migrate to the root stocks where they build galls again to produce new eggs. This results in millions of larvae every season. Sometimes, depending on circumstances like presence of food, size of the population and temperature, a larva develops into a winged form that will migrate to a healthy plant.

Scheme of the life cycle of the grape louse

The leaf shape is barely visible. It is a very small louse, smaller than 1 mm. In this stage it does little damage in terms of the production of the grapes or their quality. The root phase, on the other hand, causes the plant to die off. The only remedy against this is to graft grape plants on American rootstocks that are resistant to phylloxera. If there are a lot of leaf shapes and galls, the leaves can become deformed and discolored and defoliation may occur, which of course will reduce the yield. This is less common in France as it is in, for example, America and Australia.

Finding a countermeasure was not an easy task. And even today there is still no well-functioning remedy against the grape louse. In the end the solution they came up with was to graft the wine plants onto American rootstocks that were resistant. But it took years before it came to that. 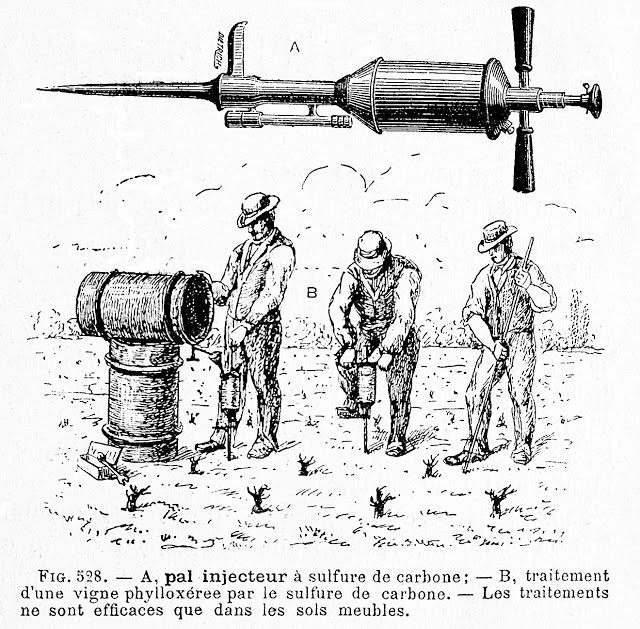 Many methods were tried, such as submerging the vineyard for 40 days and fighting the louse on the vines with carbon disulfide, but none of the methods had any form of success. Until it was realized that the American grape varieties were already resistant and people started looking in this new direction. Some French Notables had American root stocks which had remained healthy. One problem, however, was that the American rootstocks could by no means match the European rootstocks in terms of quality, the result of a more than two thousand year lasting selection process. The grapes had to be adapted to the environment and climate of the Charente, they had to be sufficiently productive and resistant to too rapid oxidation. The taste of the American wines often had a fox smell, a ‘goût foxé’, a smell and taste reminiscent of fox urine. The use of hybrids, crossbreeds between American and European roots, did not work out either. Grafting was seen as a last resort, but it did meet with many objections. Would it be possible that American roots would cure a disease that came from America? In addition it meant that all vineyards had to be completely eradicated and replanted. Most vintners had insufficient funds for financing such an operation.
Gaston Bazille had been doing research on the process of grafting since 1871. He first grafted American scions – which had been sent to him by Riley, but had arrived in poor condition – on European rootstocks. Then he had them rooted and used them as new rootstocks themselves. But it was not until 1878 that he reported on his efforts because he did not have much faith in it before. In those years they were still very busy looking for better solutions: the problems were still immense. There was a lot of experimenting with Vitris rupestris and Vitris riparia, because they seemed to be powerful and the most resistant to disease. But on the calcareous grounds leaf chlorosis appeared. It is only around this period of time – around 1890 – that research on resistant species that could be grafted was taken up more seriously.

In 1887 Pierre Viala was sent to America in search for resistant vines that did well on calcareous soil. His journey lasted six months, during which he travelled the whole of America. For a long time it seemed that he could not find the right 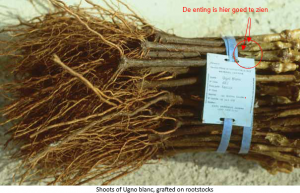 soil with vineyards on it until with the help of Thomas-Volney Munson he finally found the proper grape varieties in Denison Texas. Vitis berlandieri, Vitis cinerea and Vitis cordifolia are the species resistant to calcareous areas worth exploring further. In the end there seemed to be several drawbacks to these varieties. For example, the Berlandieri shoots took root very badly to name but one. Eventually a crossbreed between the Vitis berlandieri and the Vitis vinifera (41 B) proved to be the solution. The fear that crossbreeds with the Vitis vinifera would ultimately weaken resistance to Phylloxera turned out to be unfounded. Nowadays, multiple crossbreeds are used, depending on the soil on which they are to grow: for example, Fercal, Ruggieri 140 and 41B do well on champagne and ‘groies’ soils, SO4, 110 Richter and 99 Richter do well on silico-argileux soil.

In 1895, more than 12,000 hectares of vineyard were replanted with grape plants that were grafted on American rootstocks. In 1900 these numbers had grown to 55,000 and around 1975 110,000. But due to economic factors and restrictions imposed by the B.N.I.C. that number was gradually reduced to about 75,000 Ha in the following years. The enormous size of viticulture such as we have seen before the Phylloxera disaster (283,000 Ha) has never been reached again.