The year 1811 was an extraordinary good year for wines and is generally known as ‘The year of the comet’. That year a huge comet appeared in the sky. It was not the well-known Halley comet, but another one that has not gotten its own proper name. It is called C1811 F1 and was first discovered by Honoré Flaugergues. For this reason it is sometimes called the Honoré Flaugergues comet. Wines that were grown in that year are called comet-vintages. But not only wines profitted from it, also other products made from wines, like cognac. 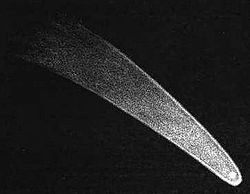 In 1811 the C1811 F1 comet was visible for the most part of the growing season. The year had a very long and hot summer, yielding abundant harvests. In regions like Bordeaux, Cognac, Champagne and Sauterne it resulted in incredible wines.

The 1811 crops in other European countries were outstanding as well. In the cognac region the Folle Blanche quality was unique and producers were well aware of the fact this was a once of a lifetime harvest. Many of them attributed this result to the conspicuous comet that was dominating the skies: The Great Comet. While astronomers could see the comet for seventeen months, it was visible to the naked eye for about two-hundred-and-sixty days. And particularly during harvest time – in Septembre and Octobre – it lighted the nightly sky. At a given time its diameter surpassed that of the sun. It was considered a supernatural blessing of the harvest and since then the year is known as the Comet Vintage. 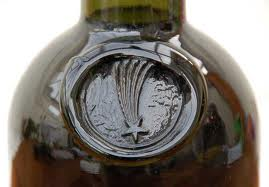 It didn’t take long for the outstanding cognacs to be recognized by the public. And all big brands used to put the year 1811 clearly visible on their bottles, sometimes even with a representation of the comet, frequently in the shape of a star.

This representation came to be associated with outstanding quality. Thereafter many bottles were produced that had 1811 stated and at the end of the 19th century there was an abundance of them around.

A small number have survived the years and are being offered for sale now and then. But not all of these are really from the 1811 harvest, though the 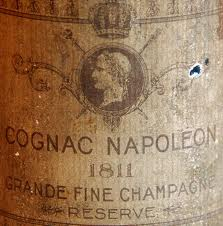 quality still may be good. Often 1811 was merely used as a sort of method to indicate the best and oldest quality a cognac house had to offer, as a sort of tribute to the famous year.

In the years from 1930 till 1960 many producers, specially in the US, committed fraud by putting young cognacs in bottles with fake 1811 labels on them. They are not very difficult to spot, but you have to be careful.