The history of alcohol

When studying the history of alcohol, you may distinguish a number of separate developments:

The history of cognac making starts later (16th century) and is described separately.

Alcohol has been known to man for a very long time. The oldest indications of men making alcohol date from prehistoric times, the Neolithicum (11.000-3.300 B.C.) and are being based on the findings of pottery that had residue of alcohol in it. The question remains whether leftovers of fruit or cereals had started to ferment spontaneously or whether people had purposely made alcohol (beer or wine). In Çatal Hüyuk, Turky, pottery from the 7th millennium has been found with pips in it from grapes. Are these perhaps the remainders of wine-residue? 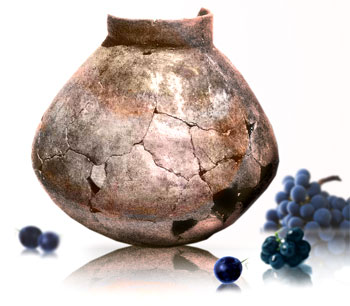 With much more certainty we can establish that in the 6 th millennium B.C. wine has been made in the Northern parts of Iran, witness the jars that have been found with an abundance of crystals of tartrate in it (around 5400 B.C.).
However, it is very probable that man, like animals, knew alcohol much longer from the fruits fallen from trees that had begun to ferment. It is known that some animals, apes for instance, overeat themselves and get intoxicated. It is not hard to imagine men in prehistoric times having done the same.

In pre-historic times beer was made of bread, soaked in water and made to ferment.

Only in the 3th millennium B.C. we find the first evidence of wine being made by man. It is assumed that wine-making begun in the Caucasus and in Eastern-Turkey.

As early as the 4e millennium B.C. appliances for distilling are around (China around 3000 B.C.; India around 2500 B.C.; Egypt around 2000 B.C.). Yet the distillation with the purpose of making alcohol started much later. We know that Chinese people distilled a brandy of some sorts around 800 B.C.
The first methods of distillation were very basic: a fluid in a pot was being heated on a charcoal fire and the vapors were being catched, for instance in wool that was hung above the pot. When the wool was soaked enough, it was replaced by new wool. The soaked wool was being wrung out to obtain the distillate. This process is called ‘destillation per ascensum’.  In the old days distillation was used for multiple purposes, for instance to obtain odorants, for medicational purposes or (much later) to obtain drinking water out of seawater. 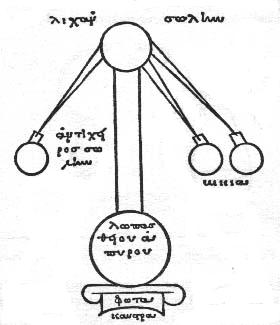 She is also the inventor and name-giver of the ‘bain-marie’. The art of distilling spread form Egypt to Arabia.
Although is has never indisputably been proven, it is generally accepted that the Arabs invented the distillation of alcohol in the ninth century with the alchemist Jabir Ibn Hayyan playing an important role. The word alcohol stems from the Arabic ‘al’ (the) and ‘ghoul’ (spirit or something very fine and subtle). According to an other theory the word stems from ‘al’ and ‘kuhul’, kuhul being the very fine powder made of antimony, used by women to darken their eyelids. The name alembic also originates from the Arabic language: ‘al’ and ‘anbic’; an anbic is a jar or pot. The Arabic word anbic by the way, stems from the Greec ambix.
The first clear evidence of distilling alcohol is being found in twelfth century Salerno. The first person in France to distil wine was Arnaud de Villeneuve (Arnaldus de Villenova) around 1250. He introduced the term eau-de-vie to describe his distillates. But magister Salernus used the term Aqua Vitae already in his writings in the 12th century.
Ramon Lull (or Llull, or Raimundo Lullus in Latin) writes his manuscript “Testamentum” in the 13th century with in it extensive clues about the procedure of wine distillation.
At the beginning of the 15th century the first brandy is being distilled in the Armagnac region. Only in the second half of the 16th century we find the first indications for distilling wine in the Cognac region.
The method of the double distillation as practiced for cognac is being attributed by the French to the Chevalier de la Croix Marron (approx. 1580-1600). Allegedly this idea came to him in a dream. And although the chevalier is person that has really lived (he even wrote a few books), this story is only based on tradition and their is not much truth in it.
1617 Is the year in which ‘brandy from Cognac’ is mentioned for the first time. Around 1650 it comes in vogue to use the name ‘cognac’ to indicate the eau-de-vie that stems from that region. And it were the English who introduced it.