History of legislation on Cognac

1. Law on brand names
2. Legislation on transport and origine
3. Legislation on authenticity
4. Law in relation to foreign countries
5. Law on production methods and specification of the regions
6. Law on age of cognac

The first law on trademarks was passed on June 23rd of 1857. It is now possible to deposit a brand by means of a name or a logo. In 1864 both Hennessy and Hine were among the first to register their name and logo.

2. Legislation on transport and origine

Like any other commercial goods cognac was taxed already in the 17th century. Amongst the most common methods was taxing goods when they had to be transported. To this purpose the Aydes system was introduced. The people of the Aydes (or Aides) collected tax and provided wine-growres and producers an acquittal or ‘Acquit’, the proof that taxes had been paid.
On March 27 of 1872 the Acquit was officially registered by decree as a document called ‘titre de transport’. At first there was no specification of the geographical origine of the product in this document. That changed in 1903.  On March 31 of that year the Acquit Blanc was introduced for those products of which the origin could be guaranteed by the government. For the products of which the origin could not be guaranteed, the old Acquit remained in place. This was printed on red paper and was therefore called ‘Acquit Rouge’.

On August 4th, 1929 another law was passed in which the Acquit Jaune d’Or was introduced. It was printed on yellow-gold paper and it provided much more clarity because the origin of the product was stated much more specific. The Acquit Jaune d’Or had three parts, one of which was designed for the foreign customers. The other two acquit’s (blanc and rouge) were abandoned.

Next in 1907 a law is passed ordering that no substance whatsoever is to be added that could alter the composition or the taste. But an exception was made for sweetening and colouring the product, within certain limits.

The region for the production of cognac was specified by the Law of May 1, 1909. It was accompanied by a map, drawn by M. Guillon, a viticultural inspector. He used the 1887 map from mr. Mouchet as his starting point. 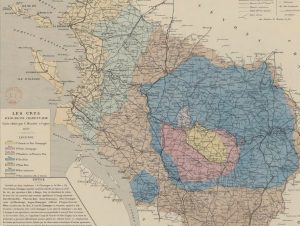 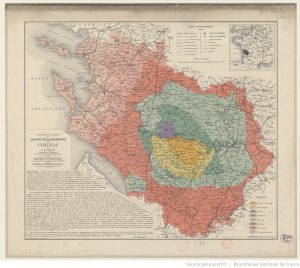 Almost 30 years later, on May 15 1936 the ‘appellation d’origine controlée de cognac’ is adopted by decree for eau-de-vie de Cognac originating from the region that was specified in the Law of May 1, 1909. This decree also specifies the denomination Fins Champagne and the regions Grande Champagne, Petite Champagne, Borderies, Fins Bois, Bons Bois, Bois Ordinaires and Bois à terroirs. But the exact delimitation of these regions was only specified two years later by the Law of November 30th of 1938, where the 1936 Decree was complemented with an enumeration of all the departments, districts and communities of the cognac region. Some communities are not fully part of the cognac region and are mentioned by name.
(By the way: all regions were already stated in a law of January 13th, 1938. All communities were also called by name in this law.)

The Law of May 6th, 1919 stipulated that every individual person and every company was entitled to initiate legal actions when deceit was suspected regarding the appellation of cognac.
Moreover this Law emphasized the requirement for all spirits to come from one region and one cru to be recognized as coming from that particular cru, meaning that all cognac must be from wines grown in that area and distilled in the cognac region. The whole process being under the strict control of the State.

A new law saw the light on July 22nd, 1927 to warrant the quality of the product even further. In this law the allowed grape varieties were limited to those that were customary in use for a long time and generally acknowledged by the local wine-growers. This of course meant the end of hybrids who often had a much greater, but gave an inferior end-product.

The Law of February 20th, 1928 legalized the term ‘Fine’. The use of the word ‘Fine’ is restricted to eau-de-vie made of wine or cider and is accompanied by a geographical vinicultural or cider-production appellation. Its purpose is to explicitely state that the named eau-de-vie or cider originates exclusively from that region.

4. Law in relation to foreign countries

During the Madrid conference of April 4th, 1891 the principle was acknowledged that ‘appellations’ of wine products could not have a generic meaning. In other words: a copy of a product made in another country or region was not allowed to take the name of a product for which an appellation was in place. So a brandy from the cognac region, made of ugni blanc grapes and distilled using the methode Charentaise was allowed to be called cognac, but a brandy from Spain made of ugni blanc and produced using the same method, not.

This principle now was very poorly lived up to by the participating Member States. They felt not interested, while this principle also applied to products from their own countries. Initially this agreement was only signed by a small number of countries. But in the decennia that followed, France always endeavoured to persuade other countries to sign the agreement. Sadly even today there are still some countries that have not signed yet.

5. Law on production methods and specification of the regions

A very important Law was delivered on May 15th, 1936 in which the appellation d’origine controlé is recorded for the first time and in which some methods for the production are specified. The cru’s are mentioned again and also the grape varieties to be used.

The Décret of  June 16th, 2011 essentially lists all legal provisions from the past, with some legal provisons and extensions that were added over time: 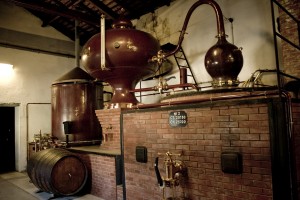 – distillation is allowed until March 31st of the year following harvest;
– double distillation in the region is mandatory;
– the alambic must consist out of a boiler (chaudière) above a naked flame, a helmit (chapiteau), a swan-neck (col de cygne), possibly a preheater (chauffe-vin) and a spiral tube serpentin) with a condensor (appareil réfrigérant);
– apart from the pre-heater all equipment has to be made of copper;
– the still (chaudière) has a maximum capacity of 30 hectolitres and is allowed to be filled with a maximum of 25 hectolitres; this only applies for the second distillation;
– for the first distillation a still with a  maximum of 140 hectolitres can be used; this can be filled with 120 hectolitres (max.);
– distilling is to be done with a naked flame;
– eau-de-vie is not allowed over 72.4 per cent of alcohol (at a temperature of 20°C.).

6. Laws on the age of cognacs

As of October 15th, 1924 an obligation, imposed by the indirect taxation authorities, was in force to register all eaux-de-vie of one, two and three years of age. This was caused by the Australian demand for an age-certificate issued by the French government. Up to that time age-certificates were issued by the maior of the city.
In the period 1925-1940 several amendmends to this regulation were made, but a complete and sound control system was very hard to realize. During World War II this control system watered down completely.

The judgement of February 20th, 1946 assigns the responsability for controling the ages of eau-de-vie to the Bureau National Interprofessionel de Cognac (BNIC). This judgement also stipulates that the age of a blend (‘coupe’) is determined by its youngest component.
And from this day on the obligation, imposed by the BNIC, is in force to keep detailed records of all eaux-de-vie with its age and origin.

On October 27th, 1953 the BNIC provides that the designations VO, VSOP and Réserve were only to be used for cognacs with compte 4 and designations Extra, Napoléon and Vieille Réserve for cognacs with compte 6. In 1955 this provision was once more ratified. Compte 6 incidentally, came officially into force in 1979.
Also in 1955 the date on which the ages of cognac increase with one year changed from September 1, the start of the harvest season, to April 1, the end of the distillation period.

In 1962 single vintage cognacs were banned. A few exceptions were made: early landed cognacs (these were ageing in England) and three cognac houses who held a perfect registration and could prove the provenance regarding year and district of their eau-de-vie. These three were Croizet-Eymard, Delamain and Hine.
In 1987 this ban was lifted again.