Names and marriages in the early years

The entrance of cognac in the world was a relatively late occurrence. In the year 1500 the name Cognac was only used for the little village Cognac and distilling in Charente was still nowhere to be found. Armagnac on the other hand, the eau-de-vie of the nearby region, was already in the 15th century a commodity in which some trade was going on. But for cognac we only see the first shipments of brandy from the Charente region in the 16th century. And it took another hundred years or so before the name cognac was used to indicate the distilled spirit of the Charente region. It is at the beginning of the 17th century that the first names of shippers and merchants in cognac emerge. 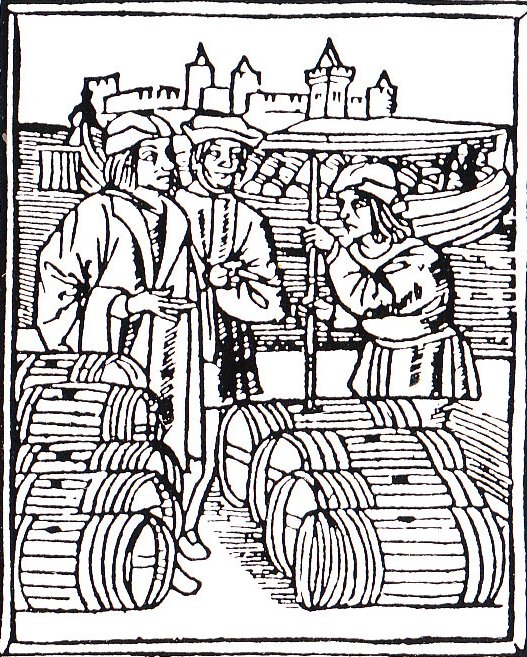 Between 1600 and 1610 these first names were Jacques Roux, Michel Levesque, Jacques Ranson, Guillaume Haguenon, Isaac Bernard and Pierre Gilles. In 1619 Gourry de Chadeville started his firm and today he can boast to be the oldest cognac producer and bouilleur de cru still in existence.

In 1643 Philippe Augier established his firm. It is more than 80 years older than the oldest of ‘the big four’: Martell (1715). Augier started as a merchant in a variety of goods. At first cognac was just on the side, wines being far more important. He married to a daughter of a Dutch paper manufacturer, which without any doubt helped a lot in setting up his business, because knowledge of trading abroad was very important.

Not very much is known of the second half of the 17th century. The first written documents are the 1681-1686 Augier letter-book. But we do know that cognac remained a mere adjunct to wine during those years. In this periode the most important markets for cognac were Amsterdam, Hamburg and Guernsey and Augier seemed by far the most important merchant. One name that pops up in the early 1680s was that of Ranson in Jarnac, who in those years seemed to have been a supplier for Augier. Ranson probably is the oldest surviving family name being in the spirits business. His name was mentioned in a dispute with Isaac Bernard in the year 1604 about a monopoly on eau-de-vie in the region. Other names of importance in the last two decennia of the 1600s were Broussard, Lallemand, Pierre Richard, Guérinet, Riget and Brunet.

In the early years of the 18th century Jean Martell – born in Jersey, one of the Channel islands – starts learning the trading business in Guernsey. He soon headed for France, partnering with a Bordelais partner, trading in all sorts of goods. He was not very succesful at first, but managed to pick himself up. Two succesive marriages helped him in his career. First in 1726 with Jeanne brunet, daughter of an important merchant family in Cognac, and after her untimely death, with Rachel Lallemand in 1737, also a daughter from an important merchant. In the mid-1720s business was thriving for Martell.

Other names during the first quarter of the 18th century were Le Mesurier from the Channel Islands and Régnier, who appeared in 1719. In the mid-20s John Baker was active. He became partner to the German Pierre Bryhan. In Pons the Arbouin family was very active around 1727.

In the 1720-30s we learn that Jacques Ranson, like other families had done (Riget, Guérinet, Augier, Richard, Brunet), had set up shop in Amsterdam. The Ranson family, already in the distilling business in 1604 as we saw, stayed active and Isaac Ranson meets James Delamain in 1757 in Dublin where they start to do business with each other. Delamain marries Marie Ranson in 1763 and becomes parter to Ranson in 1762 (Ranson & Delamain).

These three, Augier, Ranson & Delamain and Martell were the three most important players during the second half of the 18th century. Other marriages helped consolidating their position, amongst which were Philippe Augier to Anne Marie Broussard (1757) and Etienne Augier to Martha Catherine Martell (1762). Rémy Martin, who claimes to have been established in 1724, was just a very small producer and Hennessy, who came to France in 1765, was just beginning to make a real name for himself.

At the turn of the century though, the biggest companies were Martell, Hennessy, Otard, Dupuy and Delamain.