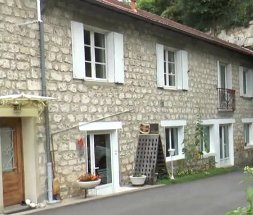 This company was established by Lucien Charlemagne in 1921 and was for a long time known as Les Celliers du Tropic, probably after the street where they are housed. It is now called Les Caves Charlemagne. Lucien Charlemagne comes from the champagne region and mainly focused on making sparkling wines, methode champenoise. From 1981 the family company became the property of the Bouyer family. Emmanuel Bouyer, who is in charge today, stems from a family of winemakers and distillers. Paczensky calls Les Celliers du Tropic a distllery in his book! They mainly focus on making sparkling wines (methode champenoise), but they also produce normal wines, pineau and cognac. The cognacs are blends.
The building on Impasse du Tropic nr. 15, which is somewhat difficult to find in the southeastern part of the city, is built against a limestone mountain and contains large limestone cellars (les celliers) with a high moisture content, something you would certainly not expect in a large city like Angloulême.