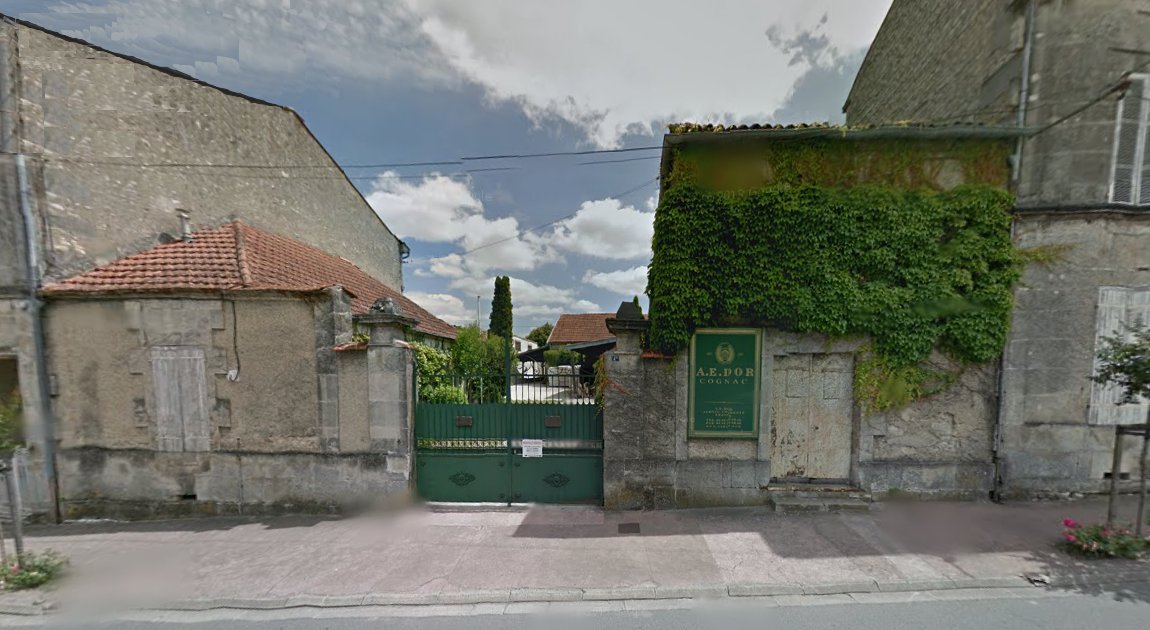 Jean Baptiste Dor, who was a doctor of medicine, established this highly regarded company in 1858 in the town of Jarnac. His son, Amedée Eduard Dor, gave the company its name in 1889. At the time, the company was still located in Blanzac

In 1998 they bought the brand Albert Jarraud, including its stock.

From 1922 till 1972 the firm was headed by Noël Denieuil-Dor who in 1951 got permission to sell cognacs below 40 percent of alcohol. He maintained that part of his stock had reached this low percentage only through natural evaporation. AE Dor still is the only company who is allowed to do so.

In 1972 Dor became property of the Benedictine group, owned by the Legrand family. The firm was run by Philippe Mitterand (brother of François Mitterand, former president of France).

In 1982 Odile Rivière bought AE Dor. AE Dor had two important things going for them. One: a fenomenous stock of very old cognacs, some of them dating back to the pre-phylloxera era, and secondly Odile Rivière who proved to be an excellent maître de chai. Her blends are among the best in the world.
Note: some writers claim Odile Rivière was a descendant of the Dor family. She was not!

1992: tragical death of Odile Rivière in a car accident. Her husband Jacques Rivière took over together with Philippe, his brother. After some years Pierre-Antoine, son of Jacques and Odile, also joined them.

In 2015 they become part of the Coöperative Charentes Alliance, who also owns the Unicognac groupe (Jules Gautret). Later that year Charentes Alliance merges with Coréa Poitou-Charentes to become Océalia. Owner of AE DOR, Pierre-Antoine Rivière, is of course still the managing director as they remain very independant.

AE Dor has always been a business firm. They buy cognacs and age them in their cellars. Just a few years ago they acquired sixty hectares of vineyard and the harvest of this vineyards are distilled in the alambics of a company that has family ties with AE Dor, supervised by Béatrice Coussy who is cellar master at AE Dor and who has been educated by Odile Rivière.
Their vineyards are mostly in the grande champagne area, but also some in petite champagne, borderies and in fins bois.

Some other brands that have been produced by AE Dor are:

They have also produced cognacs for Haus Grashoff, a famous restaurant in Bremen (Germany).

Dor still has some cognacs of the year 1805, but are reluctant to market them.
They mainly make grande and petite champagne cognacs.

Range (many old ones are not for sale anymore):

The numbers 9, 10 and 11 were distilled and blended by Odile Rivière and are not made any more. The numbers 6, 7 and 8 are still being produced.
Some of the very old bottles, like the 1805, can still be produced on demand. But they are not cheap!