Legislation limits the grape varieties that may be used for making cognac. The varieties that are to be used are: Ugni blanc, Colombard, Folle blanche, Montils, Sémillon blanc en Folignan. Folignan may only be used in up to ten per cent of the total.
Three other varieties are still in use and are allowed until 2020 if they were already planted before 2005. These are Meslier Saint François (synonyme: Blanc Ramé), Jurançon blanc en Sélect Blanc.
There is an additional restriction for the cognacs that carry the name of a cru. These cognacs must be at least 90% Ugni Blanc, Colombard or Folle Blanche.

The most widely planted grape is the Ugni Blanc, also called Saint Emilion or Trebbiano. There are a lot more synonyms for this grape, but these are not used in the Charente region. The two most important reasons for the popularity of the Ugni Blanc are its resistance against diseases and its acidity. A rather acid grape is far more suitable for making cognac then a sweet grape.
Next in importance follow the Colombard and Folle Blanche. The other species are not often used. The Folignan is a crossing between Folle Blanche and Ugni Blanc. 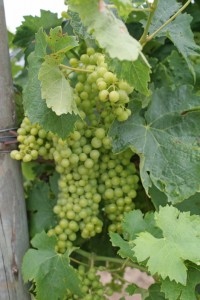 The Ugni Blanc is high in acidity which results in low alcohol percentage. It has a lot of cis-3-hexene-1-ol. The grape is very consistent and also resistant. Its taste is flowery, herbal and sweet. Its aromatic qualities are not very refined. Click here for some pictures of leaf and grapes of the Ugni Blanc, Folle Blanche and Colombard.

The Folle Blanche grape gives an eauu-de-vie that is round and rich with a lot of bouquet and a long aroma. It has a lot of alpha-terpineol.
The aroma is less refined (lemon and violins) but round and with an aptitude to develop well.
Some people credit him with pear and nutmeg flavours.

Colombard has a lot of caracter and develops better then Ugni Blanc. The Perfection of Hardy is 100% made of Colombard and is after 130 year (pre-phylloxera era) still fresh and youthfull.
It is fragrant and has a flint aroma. Others would call it an aroma of lemon blossom.
It lacks raffinement. It is full of hexanol that gives it a ´green´ flavour.
Colombard wine is less acidic and higher in alcohol, less desirable qualities for distillation.

Montils is used for its delicacy and the intensity of its aroma. A flowery, fruity flavour with an aroma of tropical fruit and licorice.

In the past many other grape varieties have been used for cognac. And before wine was distilled, different ones altogether.
Chemère (probably equal to Pinot Blanc) and Chauché (possibly a synonym of red Pinot) were two popular varieties in the 13th and 14th century.
The white wines the Dutch came for later on were made of Colombard.
Grapes that were used a lot in the era before the Phylloxera crisis were Gaumez, Colombard, Folle Blanche and Balzac Blanc. Others were Blanche Ramé, Gros Blanc, Gros Bouillau (or Bouilleux), Chalosse, Saint Rabier, Saint Pierre, Balzac Noir and Petit Noir.

It is said that Ragnaud-Sabourin has some very old cognacs lying in his cellars that are made of Gros Bouillau and Chalosse.
Gaumez was widely used until the very severe winter of 1709 (Little Ice Age), when a lot of vineyards were lost. The Folle Blanche suffered far less from this winter and people continued to use it. Balzac became the successor for the Gaumez grape. Until around 1800 it was widely used.

At the end of the 19th century, in the years 1872-1879, the Phylloxera louse caused a lot of damage. Not only in Charente but all over Europe. A Very big part of all the vineyards in Charente were destroyed. Only 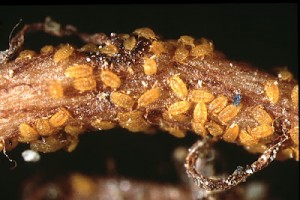 phylloxera on root of the vine.

two little enclaves were partly spared. Phylloxera did not thrive in the Borderies and in the Pays Bas (the region north of Cognac) as a result of its moist soils. Here people continued to use the pure French varieties.

So it was only after the Phylloxera crisis that Ugni Blanc was planted on a large scale, grafted on American roots. These roots proved to be immune for the Phylloxera louse.