Otard is a big cognac firm, well known bacause of their Chateau de Cognac, the chateau where François I was born in 1494 and where he grew up. The chateau is very important for the image of the city, specially when driving into the city from the north.
Since 1986 Otard is no longer the property of the Otard family.
Otard is established by Jean Baptiste Antoine O´Tard who has Norwegian (Viking), Scottish and French roots. In Medieval times the family’s name was Ottar. 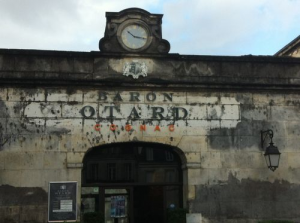 [Maybe this is the place to comment on some dates and names that you can encounter on the Internet and in some books. For example Bruno Sepulchre names Lacques Baptiste O’Tard de la Grange the establisher of the firm and on the website of Otard they say it was Jean-Baptiste Otard, whereas Cicholas Faith writes it was Jean-Antoine Otard de la Grange and he claimes it was in 1799. Delos writes that he was born in 1773 as does the French Wikipedia website .

The full name of the founder is Jean-Baptiste Antoine O’Tard de la Grange and he was probably born in 1763. This is correctly stated on the Norwegian website of Wikipedia and is also affirmed by Conal Gregory.
As to the names O’Tard and Otard: in the past even Ottar. The family has Scandinavian roots and descends from the Vikings. It is easy to understand that Ottar became O’Tard in Scotland, specially because in those days words and names were passed by word of mouth and not in writing. It is probable that O’Tard changed to Otard only in France.

Jean-Baptiste Antoine O’Tard was put to prison twice in France because of his loyalty to the King (1791 and 1793). Between 1791 and 1793 he became an engineer on the Military Academy of Pontlevoy. He has been the mayor of Cognac twice: from 1804 till 1815 and from 1815 till 1824. He died in 1824. When 1773 would be his date of birth, he would have been sent to prison for the first time when he was nineteen and became mayor on his 42th year of age. It is at least more probable that he was 29 when sent to prison for his political (and religious) conviction. The website Geneanet also states 1763 as his date of birth, but they also give voice to some doubts by writing that 1773 is mentioned for his date of birth a few pages later further on.

Usually 1795 is mentioned as the date of establishment. This is the correct date, although Nicholas Faith says it is 1799. On the Otard website you can read that the family bought the chateau in 1795. Everywere else you can read that the Otard´s bought it in 1796, one of the reasons for buying being its usefulness for storing their cognacs. It is highly probable that the great-grandfather of Jean-Baptiste Otard, James Otard (In France he was called Jacques Otard ), was active already in the brandy business around 1760.]

Otard doen not possess any wineyards anymore. They buy their eau-de-vie. De Ramefort does possess vineyards and part of the eau-de-vie is being bought from them.
They buy from four different crus: both Champagnes, Borderies and Fins Bois.

Their casks are partly Limousin, partly Tronçais. Some of their warehouses are close to the river and because of it are rather humid, but they also own some warehouses that are dryer.

Thefollowing brands are also in their possession: