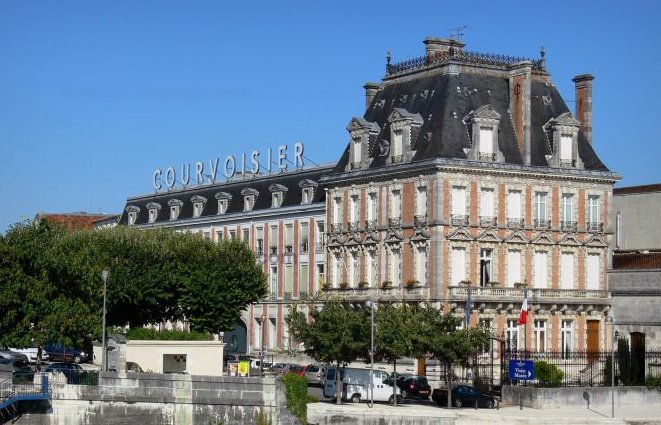 Courvoisier never owned any vineyards. They do own two distilleries. They have over 1200 wine-growers under contract and around 300 distilleries in the four best districts: grande and petite champagne, borderies and fins bois. Courvoisier instructs every distillery how the wines are to be distilled.
Guy and Georges Simon came up with the logo of Napoléon. Especially the silhouette contributed enormously to their brand recognition.
During the war the Germans confiscated the company. During these years George Hubert and Christian Braastad were general manager and the firm went by the name Hubert & Cie.

The oldest bottle in their ‘Paradis’, the cellar were they keep the oldest cognacs, dates back to 1789, as you can read in the Conal Gregory book on cognac. I found this elsewere in a newspaper article. This is remarkable since they started trading cognac in 1811 at the earliest. But of course it is not impossible they have bought an old stock sometime.

They do add caramel in their VS and VSOP to maintain a constant colour. Boisé is not being used. Sometimes a little cane-sugar sirop is used.
The distillation is usually carried out on the lees, but not always. It depends on the quality of the wines of each year. Fins bois wines however are usually not distilled on the lees.
The first part of the secondes (see under distillation) is added to the next batch of the brouillis; and the last part of the secondes to the next batch of wine to be distilled.
The young eau-de-vie is being put in new casks for a period of 6 to 24 months. After that it goes in old casks. Tronçais wood is being used because it releases less tannin. The casks have medium toasting.
After three months the alcohol-percentage is reduced to 60-65%. After a year the eau-de-vie that is destined for the VS-quality is further reduced to 55%. For the other qualities this is done only after 5-7 year. For this operation petit-eau is used.

The Erté series may not remain unmentioned. Originally they were seven, all painted in Art Déco style by Romain de Tirtoff, a painter of Russian origin who called himself Erté. Each bottle contains a different blend of very old grande champagne cognac, the oldest being from 1892. 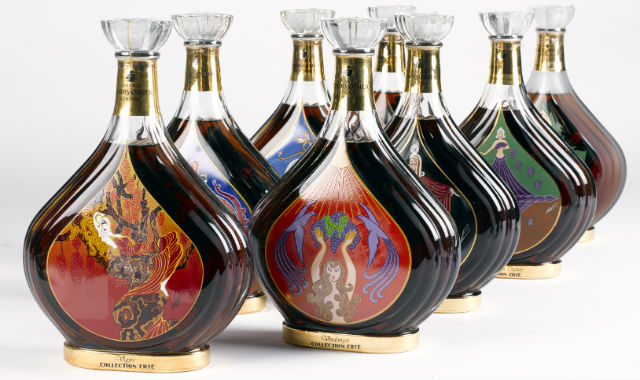 After Erté died, an eighth bottle was designed in honour of the artist. Each bottle is manually made. Eighteen different colours are being used. The bottle has to be baked in the oven four times and finally the bottle is being hand-panted with 24-karat gold. Each design relates to a different phase in the cognac making process: ‘Vigne’, ‘Vendanges’, ‘Distillation’, ‘Vieillissement’, ‘Degustation’, ‘L’esprit du cognac’, ‘La part des anges’.

Other brands in possession of Courvoisier or that have been used in the past: